Why the name “Finnian & Columba”?

At Finnian & Columba, we believe in the power of a good story. Here is the story of Finnian, Columba, and the “Battle of the Book”. Enjoy! 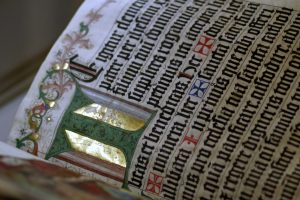 A long time ago, in the year AD 560, there lived an Irish monk called Finnian. Finnian was a learned man. One of the books (a psalter) that he had written was so good that his pupil, Columba, secretly copied it. When Finnian discovered this, he was upset and ordered Columba to hand over his copy. Finnian believed that his position was fair and just: since he had written the book, he also had the right to control its copies. Interestingly, this position is still the prevailing view on what we now call “copyright” or “author’s rights”.

Columba disagreed and refused to return the copy. He argued that the content of the book was so valuable, that, by its nature, it demanded to be copied and spread as widely as possible. Thus, Columba continued, he had the right to copy the book and disseminate its content. Columba’s view is remarkably close to the “freedom of information” position that many of us, up to the present day, defend when talking about copyright.

Finnian and Columba decided to bring their dispute before the “High King of Ireland”. The king, who disapproved of Columba’s fancy new ideas on spreading knowledge, ruled in favour of Finnian. What is often believed to be the first copyright dispute was concluded with the famous words: “To every cow belongs her calf, to every book its copy”.

“To every cow belongs her calf, to every book its copy”

Columba rejected the judgment, and called for an uprising against the king, declaring “The wrong decision of the judge is a raven’s call to battle!”  In the “Battle of the Book” or “Battle of Cúl Dreimhne” that followed, three thousand men lost their lives. This battle is probably the first (and hopefully the last) physical battle over the unauthorised copying of a book, although the toppling of the king’s clan may have been something of a bonus for Columba’s kinsmen.

Columba won the day at Cúl Dreimhne and could keep his copy, but felt deep remorse after seeing the bloodshed caused by his actions. According to legend, he went into exile to atone for his misdeeds, and worked as a missionary in Scotland until the end of his days, trying to convert as many people as had been killed during the copyright dispute.

We do not know whether this tale is based on true facts, but we do know that it is a story still worth telling!

At “Finnian & Columba” we believe that intellectual property rights, such as copyright, should provide for a fair balance between the various rights and interests at stake. Copyright should promote a compromise between the protection of the rights of authors on the one hand, and openness for users on the other hand. A fair balance should ensure that authors have adequate control over their works (this includes a proper remuneration, prior consent, author attribution, etc.), and that users have sufficient access to existing works. Both positions – the “ownership” position of Finnian & the “freedom of expression” position of Columba – remain valid!